Skip to content
By Ioanna Karelia
Last updated on: August 13, 2022

There are many web hosts out there, and sometimes I have difficulty finding enough information to figure out which of them is worth using. If I’m having that problem, I know other people are as well, so I decided to write this Flywheel vs Siteground review to help people like you make informed decisions.

Here is my Flywheel vs Siteground review.

Before we get into the main points of Siteground and why you should (or shouldn’t) use it over any other service, here are some things to think about.

How much are you willing to pay for web hosting? Cheaper deals aren’t necessarily better if you expect to have a lot of traffic. If you’re sharing space on a server, expect to pay $3 to $15/month, depending on the features you want. If you want a dedicated server, you might need to spend as much as $750/month, although you may want to buy your own servers at that point.

Every host wants you to believe that they’re the perfect choice for all situations, but the reality is that most of them specialize in specific types of sites. For example, Siteground focuses on WordPress and commercial hosting needs, while Flywheel also does WordPress but caters more towards creative people and companies.

Tech matters when you’re running a site. For example, if your host offers RAM-based servers, they can offer faster response times than anyone limited to using hard disks. Also, how well does the company scale things up? Some companies can give you additional resources much faster than others, and that’s vital if you have a sudden surge of traffic.

How easily can you contact someone if there’s a problem with your site? If tech support is only available for a few hours in the middle of the night because it’s based halfway around the world, that’s not ideal for anyone.

Siteground is one of the largest WordPress hosts on the internet, and it claims the distinction of being officially recommended by WordPress itself. That’s a distinction only shared by two other hosts right now, out of over a quarter-million web hosting providers. A company has to be special to stand out in a field this crowded.

While they’re most well-known for their WordPress services, Siteground also supports businesses running other types of software. They currently host over two million domains, which is large for a web hosting company but not in the top tier worldwide. They are a good choice for most users, but not for media-heavy users who want to host many videos.

(For context, GoDaddy – the largest web host in the world – hosts over 60 million domains.)

Here are the main features and benefits that Siteground offers on all of its standard plans.

Weebly is a comprehensive website builder, and it comes standard as part of Siteground’s basic package. This is helpful if you want to create a website that’s beyond just WordPress, but you’re not in a position to code the entire thing from scratch yourself.

Now, the inclusion of an image editor is slightly misleading. Sure, you can do some basic edits for photos, but it’s fundamentally not as powerful as a professional-grade tool like Photoshop. If you expect to do a lot of image editing, don’t rely on the Weebly system for that.

This is a great feature, and it’s one some web hosts don’t offer. A subdomain is a prefix to your regular site name and essentially exists as a separate website within the domain. This is handy because Siteground usually only permits one website on its basic plan.

However, all sites under the domain name will share the same amount of storage on Siteground’s servers, ranging from 10GB to 40GB unless you get a customized hosting solution.

This range isn’t bad for a website. Frankly, many sites will never even vaguely approach this data cap. The only way they’re likely to run out of space is if they support user-made content or include a lot of videos that are permanently available.

However, if you need to create many subdomains for whatever reason, the space limits could end up coming into play. That’s worth keeping in mind as you design your site.

This is relevant mainly for businesses and other sides that collect sensitive data, but they’re also nice to have even on regular sites. Unlike many other hosting providers, which demand extra fees for this, Siteground provides SSL certificates for all domains, automatically installs them, and automatically renews them free of extra charge to users.

Functionally, this is one less thing you have to worry about when you’re setting up a website.

This is another surprisingly rare feature, though more web hosts are starting to use it. Shipping a website essentially means transferring complete control of the site to another account (in this case, another Siteground account).

In practical terms, this means that you can hire someone else to make a website, let them create it on their account, and take it over when they’re done. If you’re a site-building agency, this means you can make websites for others and without needing to share account information.

Most web hosts don’t manage things entirely on their own, and that’s true even for services as notable as Siteground. They run primarily on the Google Cloud platform, which has three major benefits that not every web host can provide.

First, this allows distributed SSD storage. Even if a component fails in one area, which is rare, Siteground can use a backup from somewhere else and get things running again with only the briefest downtime. Google Cloud nodes are distributed around the world, which makes it nearly impossible for accidents or damage to take down the network and your backups.

Second, the network itself is state-of-the-art. Google has a massive capacity for processing requests for sites, which means the hosting network won’t be a problem for maintaining site speeds. Google Cloud is essentially the worldwide standard for powerful networks, so realistically, you probably won’t find anything better.

Finally, this support uses renewable energy, including a commitment to carbon neutrality. Google actively engages in energy-efficient practices, and with good reason: They’re so big that even small improvements can save them a lot of money. Financial motivators are the best motivators for companies, so we expect this to continue.

Siteground prefers managed hosting, which is a fancy way of saying that they prefer installing updates and such themselves. I like this because it’s another area where you could spend a lot of time but shouldn’t have to.

If more people install updates themselves, then there are more chances for things to go wrong. If more people have errors, that slows down customer service times and ultimately drags on everything the company does. Managing updates on the hosting end is much simpler.

In case anyone thinks that’s an exaggeration, remember that Siteground hosts literally millions of domains, and even more when we count subdomains in that number. If just 1% of domains have problems with updates, that’s still about twenty thousand customer service requests.

This is one of the things that really sets Siteground apart from other companies. The internet is a constantly-changing web of threats that can take sites down, and only rigorous monitoring and software development can keep sites safe.

Unlike many other hosts, Siteground has a dedicated team of security personnel who keep track of new and ongoing software vulnerabilities. This team also codes patches and other updates for Siteground to protect websites from the threats they monitor, and those are added to sites as part of the managed hosting.

Siteground claims to add about 300 custom patches to sites each year, which is a rate of almost one every single day. Unlike smaller hosts, they don’t have to wait on anybody else to make solutions to problems. They can handle this entirely on the inside, which means they can update faster and, frankly, better than most of their competitors.

This isn’t as important for small websites that don’t collect user data or track valuable information. However, for any professional or business sites, security is one of the most important factors. The in-house security is the main reason I like Siteground over most of its competitors.

I scoured the internet for some reviews of Siteground and found a few that seem rather positive. However, keep in mind that most people don’t talk about web hosts too much, so there aren’t as many user reviews in general of web hosts. 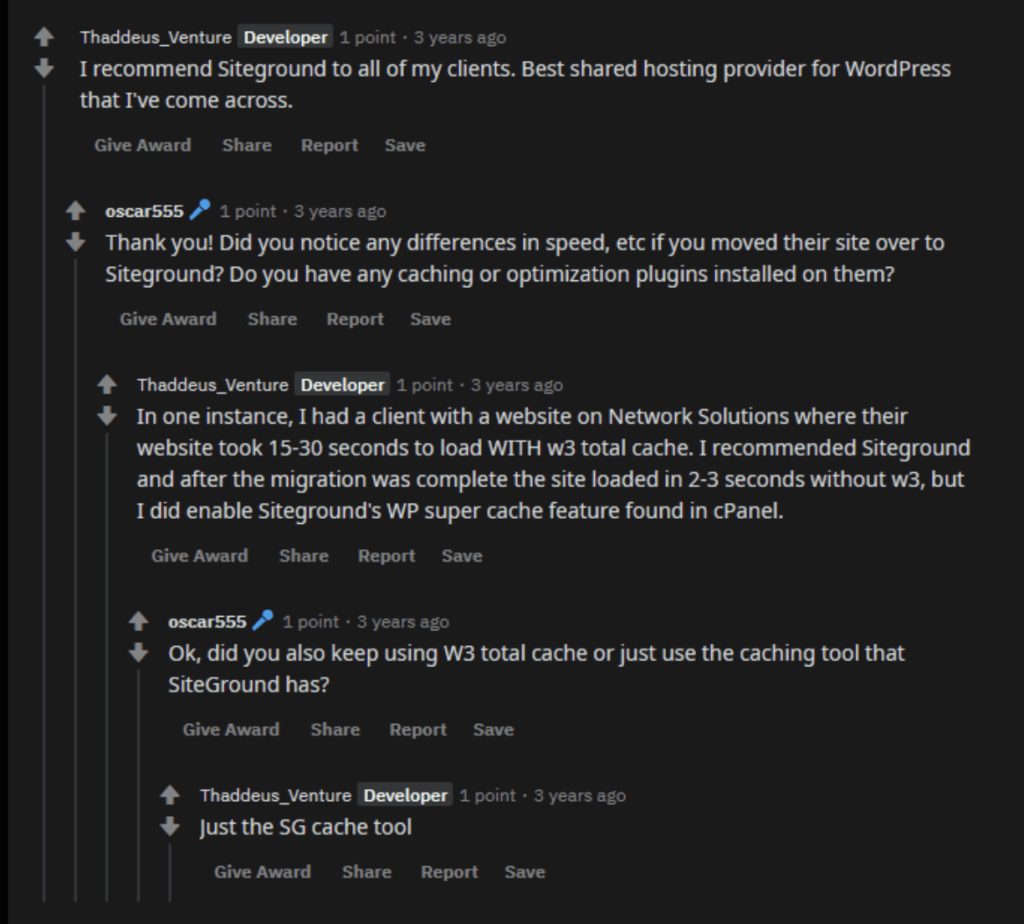 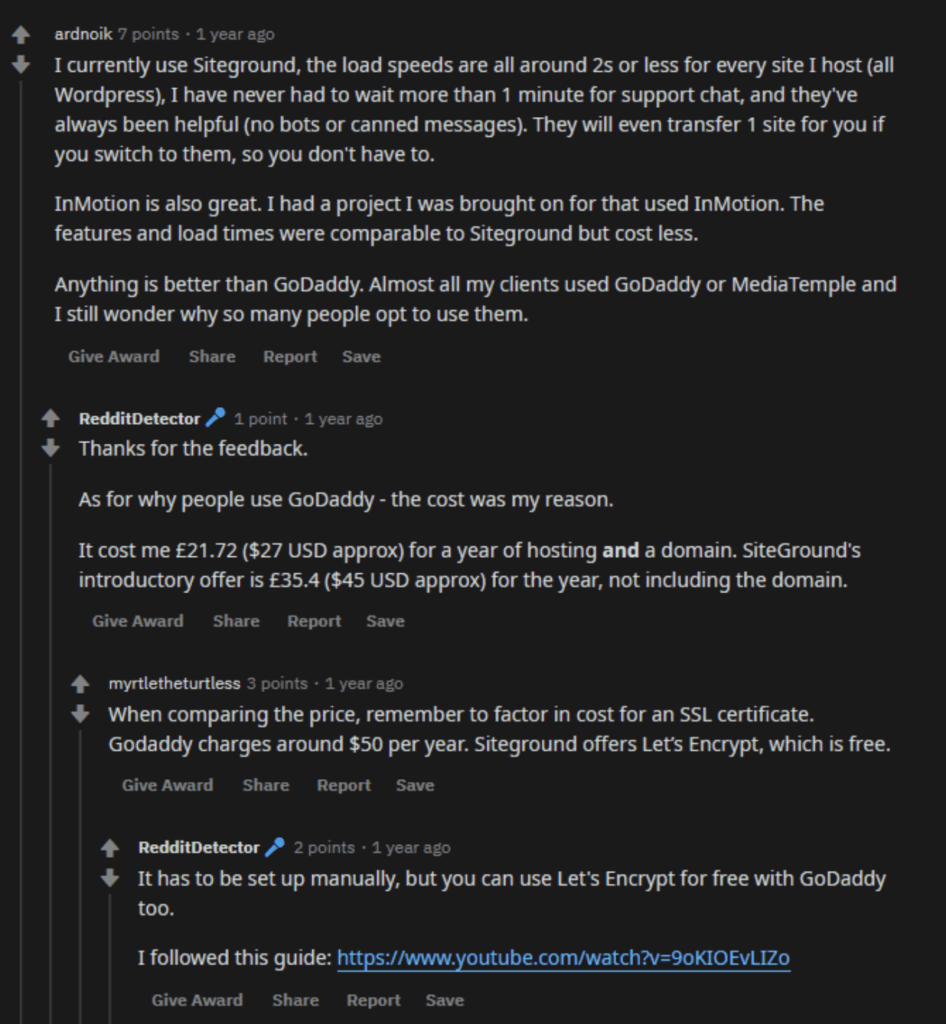 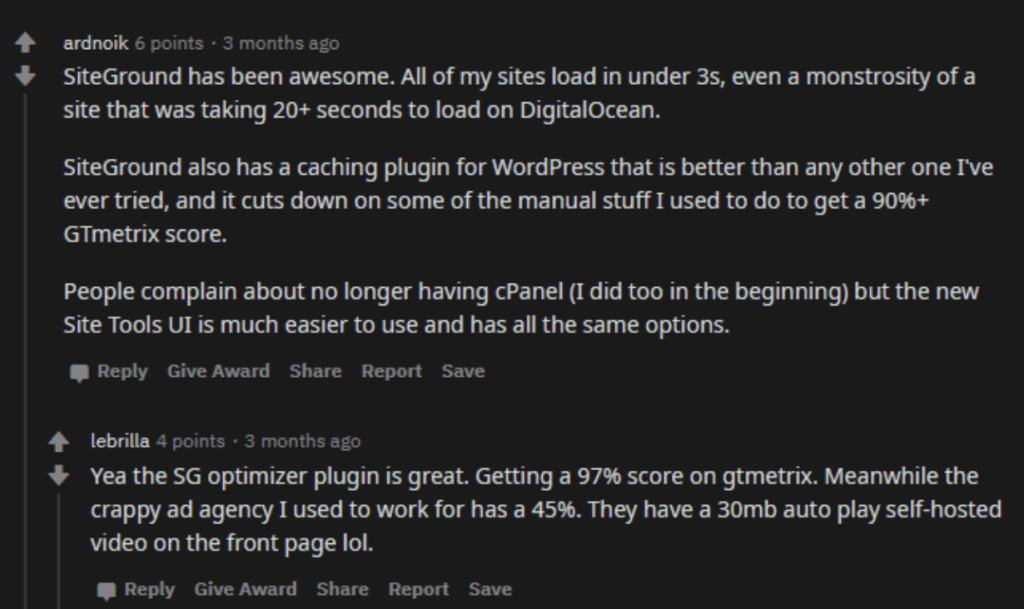 Here are some alternatives to Siteground. The statistics listed below are for each company’s basic plans and may vary based on the plan you choose.

The main focus of our Flywheel vs. Siteground review, Flywheel is a creativity-focused web host. This means that they support test environments without updating your live sites, provide help for collaboration, and provide dedicated resources.

However, Flywheel only hosts WordPress sites, so they don’t have the same level of flexibility as Siteground. In fact, as far as a Flywheel vs. Siteground review goes, that alone can be a deal-breaker. They’re also relatively expensive compared to other options, with smaller storage on their basic plan, so it’s tough to recommend Flywheel over Siteground.

In the Hostgator vs. Siteground debate, Hostgator is well-known as one of the oldest providers of hosting services. They host about the same number of websites as Siteground, but a few things hold them back. Notably, they only provide a free domain for one year, but they also offer many types of hosting services to meet different needs.

Overall, Hostgator is a good choice for many people, but their top-level plans are fairly expensive.

When considering Siteground vs. Dreamhost, the main thing to remember is that Dreamhost is an employee-owned company that focuses on open source solutions. They specialize in smaller websites, which means they’re somewhat cheaper than the competition, but they do have a few (expensive) options for dedicated support.

There are plenty of web hosts out there, but only a few that we consider genuinely top-end options. Dreamhost, Flywheel, and Hostgator are all solid choices in their own right, though Flywheel is harder to recommend if you need a lot of storage but don’t want much more than a basic plan.

Siteground is a better choice for most users, and I appreciate how it supports hosting many types of sites without compromising overall security. It can take a little time to learn their system, but there’s a reason Siteground is one of WordPress’s three recommended hosts.

Click here to visit Siteground. Just remember to compare their features to your needs before you buy. I like Siteground, but it’s not the right choice for everyone, and I’d be remiss in my duties as a reviewer if I didn’t mention that. If Siteground doesn’t meet your needs, look at Hostgator (above) first, then Dreamhost, and then finally Flywheel. 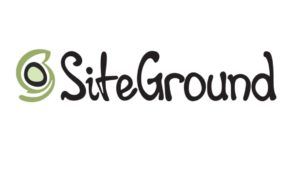 Siteground is one of WordPress’s top recommendations for web hosting. Find out more in this Flywheel vs Siteground review.