Skip to content
By Ioanna Karelia
Last updated on: January 6, 2022 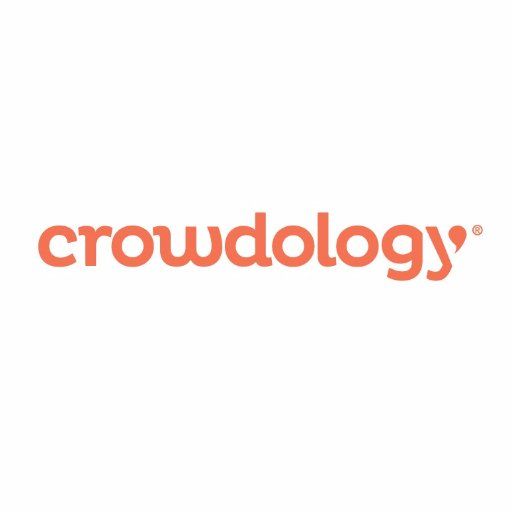 Crowdology Review – Get Paid For Your Opinion

With the ups and downs that you might have in your career, I understand the draw of having some extra cash in your pocket.

Survey sites like Crowdology are a temptation. These websites offer a chance to get paid for your opinion just by taking surveys. For many poeple who are hurting for cash, it seems like a simple way to pad your wallet a bit more.

Here Is My Crowdology Review 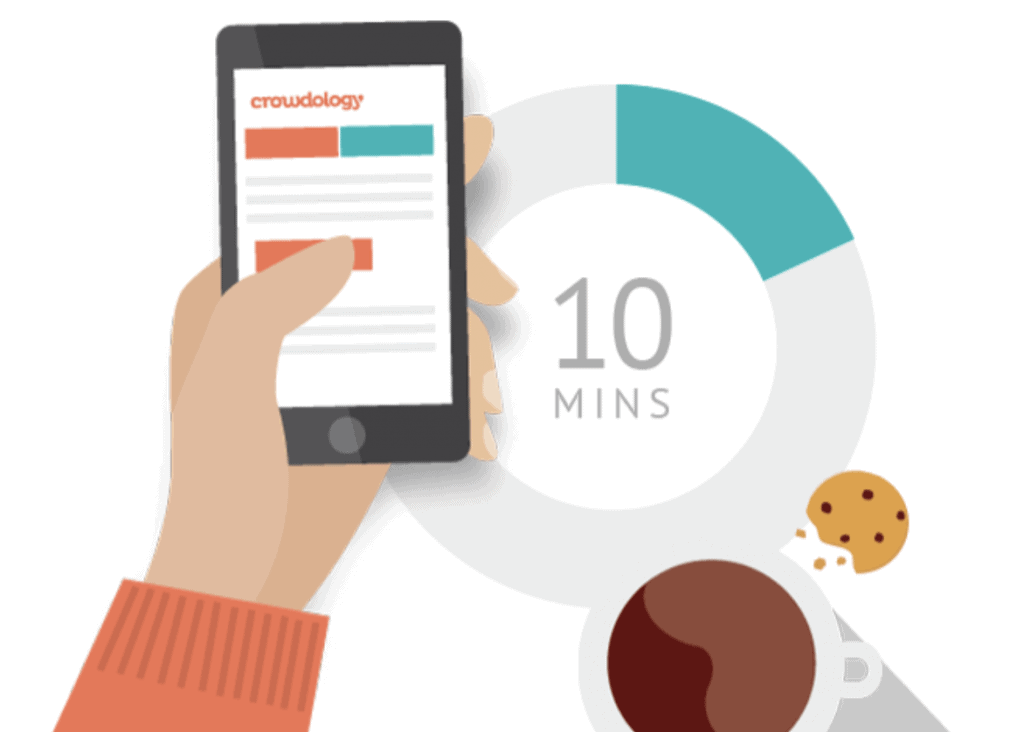 Things To Consider Before Choosing A Paid Surveys Site

Paid surveys are marketed as an easy way to make extra cash from home on your own time. Survey sites usually pay through Paypal. Users can withdraw the money they earn to Paypal once they reach a minimum threshold.

The ideal customer for a site like this has free time and wants to earn a bit of money on the side. It won’t be anything revolutionary—each survey usually pays less than a dollar, although some can pay as much as $10.

Don’t try out a survey site looking to make bank. Surveys are time-consuming, so they are only good for a small amount of cash each day. But if that’s something that would be beneficial to you, surveys could be a good choice.

You should be aware of a few other things before you start doing surveys for money.

First off, you might not qualify for every available survey. Surveys work by looking at customers in a specific demographic. This could be anything from income level to education, race, or buying habits.

Most surveys start by asking you some basic questions about yourself. If you don’t fit in the demographic they’re looking for, you won’t qualify for the survey. This means that you can spend time answering questions and then still not be chosen.

It can be challenging to find surveys for your specific demographic, especially since you don’t necessarily know what a company wants.

Here are a few things that surveys look for:

If you don’t fall into these categories, you might have difficulty finding a survey for you. In that case, another side hustle might be more lucrative.

Crowdology is an online survey site that offers cash payments for taking surveys. The surveys are generally about current events or household products. Crowdology promises that the surveys are easy and entertaining.

The site pays better than comparable survey sites like Survey Junkie and is more engaging. Five-minute surveys pay 50 cents, but there is a range of prices and time limits.

Crowdology is for people looking to use their free time to make a small amount of extra income. It’s not for anyone who wants to make survey-taking a full-time job. 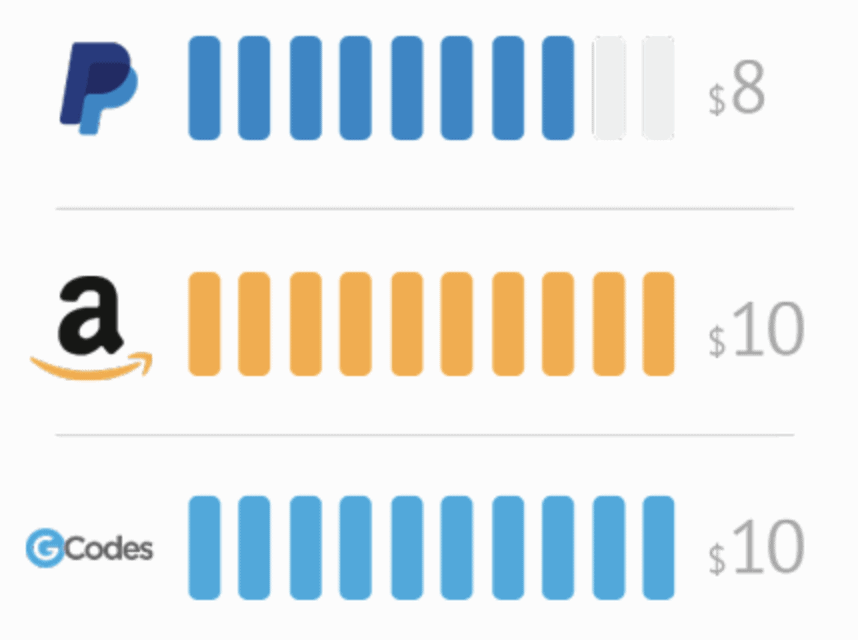 It’s easy to make an account on Crowdology. Registration is available to anyone above the age of 18 in the United States or the United Kingdom. After you submit your Crowdology login, you’ll get a confirmation email. Then you can start taking surveys right away.

The website offers a couple of ways for its users to earn money and other rewards. These include Paypal surveys, sweepstakes, and gift cards.

Crowdology promises that its surveys are fun and entertaining. This is certainly a contrast to many other survey websites. Many of these can be long and monotonous, which can make them difficult for users to complete.

While most of the surveys pay between 50 cents and a few dollars, some can be as much as $10 apiece which makes it a more lucrative choice for survey takers. If you qualify for enough high-paying surveys, you might make as much as $40 a day.

One nice feature of Crowdology is that it doesn’t use a point system for delivering rewards. Many other survey sites offer a point total for each survey. Once users reach a certain number of points, they can redeem them for rewards. Instead, Crowdology cuts out the middle step and offers flat prices for each survey they offer.

This makes it easier for users to get payments quickly, which is the whole point of signing up for a platform like this!

Another way that users can get rewards is through sweepstakes. Crowdology offers these regularly. These offer prizes that range from cash to gift cards and technological gadgets. In the past, they have included rewards like Nintendo Wii consoles and Apple watches.

No one who uses Crowdology is required to submit their name in a sweepstake. But it can be a worthwhile incentive — and a nice reward — if you do end up winning one.

The website has these regularly, and you lose nothing if you do decide to sign up. It is another way to earn extra cash or other prizes, which is generally what survey takers seek.

Some users feel that submitting their name for sweepstakes isn’t worth it, and that’s fine too. You can still make some side money by sticking to taking surveys and getting paid for them.

Crowdology users can choose to put their money toward a prepaid gift card rather than withdrawing cash. This can be helpful since Paypal charges fees for bank transfers. These fees are small, but if you’d rather avoid them altogether, gift cards are an excellent alternative.

These gift cards are generally for online retailers such as Amazon. However, one drawback is that the gift cards can take as long as four weeks to arrive. Crowdology users are earning money but don’t have immediate access to it.

If you’re willing to wait, however, Amazon gift cards can be an excellent way to earn some extra money.

Whenever you reach a minimum of $8 from surveys (or £4 if you’re in the United Kingdom), you can withdraw your money from Crowdology to Paypal. This is the most direct way of getting your cash. In comparison to many other survey sites, it’s relatively quick and easy.

Paypal can have some slight delays, but generally, you can expect your money within 48 hours of withdrawal. However, bear in mind that the site does take 2 percent of your earnings, and these fees can climb if you want to do an instant transfer to your bank.

Despite the fees, using Paypal is a great way to help users get their money fast. Crowdology’s threshold of $8 is much lower than some other survey sites, so that’s another bonus.

But the customers with positive feedback say that the surveys are engaging, readily available, and paid promptly. These positive reviews have increased since Crowdology implemented some changes. These include an option to search for available surveys, making it easier to find ones that suit you. 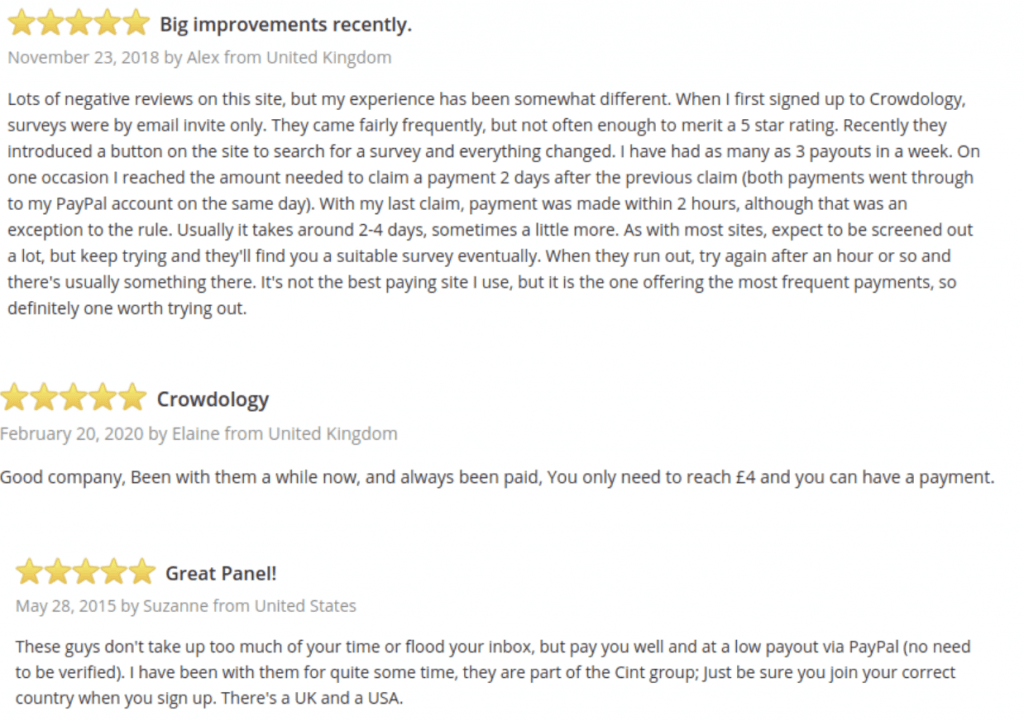 On the other hand, I found complaints from users about getting screened out frequently.

Crowdology is only one of many sites where you can take surveys for money via PayPal. So how does it measure up in comparison?

MyPoints is a survey site that lets users take surveys in exchange for points. You can redeem the points for cash, which you withdraw through Paypal. But there are many other options, too.

You can also redeem points for gift cards to online retailers or even airline miles.

MyPoints was acquired by Swagbucks, one of the largest survey websites. The result is a wider variety of surveys and ways to redeem points.

One big difference from Crowdology is that MyPoints offers more than just surveys to earn. You can also watch short videos, read company emails, and even play video games. You can also earn points by shopping at partnered retailers, effectively earning cashback on your purchases.

In general, MyPoints has good reviews from users, who say that they receive points quickly and enjoy the variety of content.

Users might dislike the points system of MyPoints since it doesn’t translate directly into cash. However, the content is varied, and the payout is prompt and easy to get, which makes MyPoints an excellent choice for anyone looking for a side hustle.

Bizrate Rewards is an online panel website that offers paid surveys. Users have the chance to earn gift cards in exchange for their surveys. The surveys earn points, which are then redeemed for a gift card to the major online retailer of their choice.

This is a pretty typical system for survey websites. People may not like that there are limited options for point redemption. There is no option for a cash payout.

Retailers included in the gift card selection are Home Depot, Amazon, Walmart, Target, iTunes, Starbucks, and others. Rewards start at 5,000 points. Since most surveys are between 100 and 200 points, it can take a while to qualify for a gift card. However, some surveys are as much as 5,000 points.

Meanwhile, the gift cards usually start in the range of $5, so you won’t be earning big bucks with Bizrate Rewards. But the site is good in terms of small rewards for retailers and restaurants.

Bizrate Rewards is only available to US residents. Gift card reception is usually within 72 hours of redeeming points. To learn more about Bizrate Rewards, check out the website.

Survey Junkie may be one of the most well-known survey sites on the internet. One of the particularly attractive aspects of Survey Junkie is that the surveys pay better. You can find ones that pay as much as $50.

There are also low-paying surveys. But the higher-paying ones make it an appealing side hustle for anyone looking for extra cash.

Survey Junkie is transparent about the payout you’ll get for a particular survey and the amount of time the survey will take.

Like Crowdology, the site only offers surveys — there are no options for watching videos or playing games. The surveys earn points, which can then be redeemed for cash or gift cards to online retailers.

Another nice thing about Survey Junkie is that you’ll earn some points even if you don’t qualify for a survey. If you answer a few demographic questions and the algorithm decides you’re not a good fit, you’ll still get a couple of points for your time. This means that you don’t waste any time.

Survey Junkie can be a good choice for anyone looking to make a bit of extra cash, especially if they don’t have a ton of free time. To learn more, log onto their website.

Our official rating for Crowdology is 1.7/5. While there are benefits to the site, like lower cashout rates, it can be tough to qualify for surveys. This results in people wasting their time instead of making money.

Individual surveys can also pay as low as 40 cents, which means that it’s just not likely to be a rewarding experience when you factor in the time investment.

If you want to check out another survey site that is more likely to be lucrative, MyPoints is a good alternative. Sign up on their website to start earning points.

Learn More About How To Make Money Online